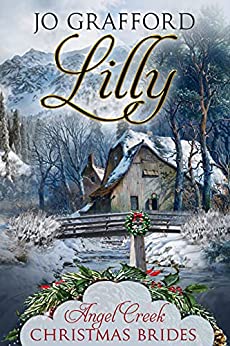 A wildly independent spinster proprietress, a hunky blacksmith in the market for a bride, and the mail-order mistake that lands him in her boarding house for the holidays…

Lilly Byrd has just been handed the keys to the Rose Haven Boarding House by the former owner who’s determined to retire by Christmas. However, Widow Gable is concerned that the spirited bluestocking will use her new position as an excuse to continue dodging every potential beau who looks her way. So she puts a bug in the ear of Lilly’s three matchmaking sisters, who are delighted to send the town’s big and bearish new blacksmith her way to rent a room.

Orphaned in his early teens, Graham Christensen is happy to be hanging his shingle in Angel Creek and can’t wait to settle down with a family of his own there. There’s just one problem with his plan — the mail-order bride he sent for was misrouted to a different groom, and the agency claims it’s too risky to send another bride north before the spring thaw. To make matters worse, the construction company he hires is running several months behind schedule.

Thank goodness a room opens up at the highly sought-after Rose Haven Boarding House, which just so happens to be run by the loveliest, sassiest little spitfire Graham has ever encountered. He knows he’s supposed to be waiting until spring to tie the knot with a mail-order bride he’s never met, but the strong-willed, capable Lilly swiftly captures his attention and his heart. He’s not discouraged to discover that she considers him to be just another pesky man she doesn’t need in her life. Fortunately, he has a few tricks up his large sleeves to prove just how useful it can be for a budding businesswoman to have a blacksmith to call her own.