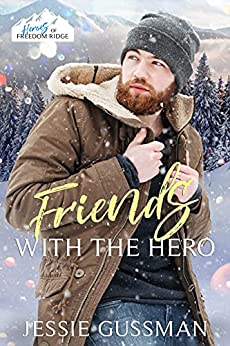 Friends with the Hero

Can a chance encounter with a former childhood best friend be the start of a beautiful romance?

When volunteer firefighter Frank “Tuck” Tucker responds to a false alarm in the middle of the night at the new bake shop in town, he doesn’t expect to come face to face with his childhood best friend. In her nightgown no less.

He also didn’t expect to get hired as her new assistant. But that happened, too. Along with an odd tingling in his hand when they shook that didn’t used to be there when they dug for crawfish down by the creek. But he needs a job and hers was the only place in town hiring. She didn’t seem to care that his former career as a smoke jumper didn’t provide much experience in baking cakes.

Patience Martel isn’t sure what caused her smoke alarm to go off, but she’s grateful for the malfunction. She hadn’t seen Tuck since her school days, and she was thrilled to actually have someone in her shop she could trust not to steal her blind, unlike her ex. She won her court case against him, but he’d already spent the money he’d stolen and she ended up with nothing but a bunch of lawyer’s fees.

Even if he’s never made anything but mud pies and river stew, Tuck is a sight for sore eyes. Could he also be just what her aching heart needs, too?